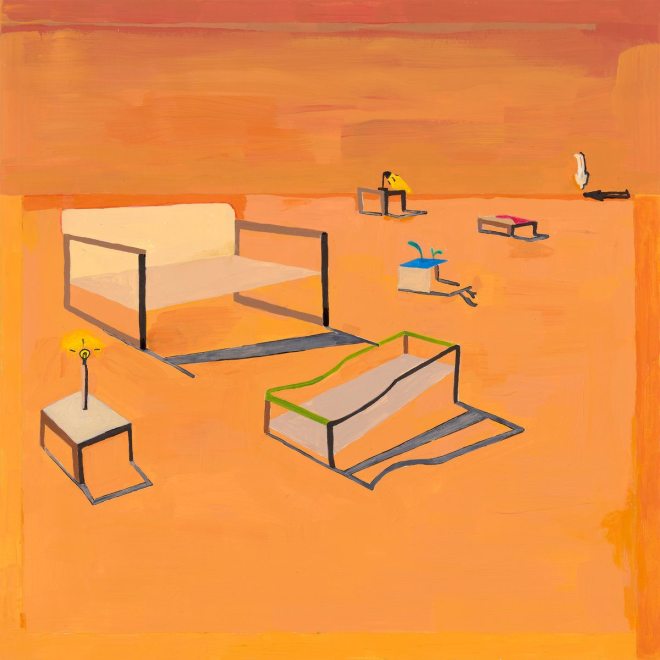 It isn’t all that often anymore that you get a fully crafted album, where songs seamlessly blend into each other. Homeshake has blessed us with such a craft with his latest album Helium, released less than a week before he starts his tour. His album artwork, done by his fiancé (check out her Instagram @salinagram if you want more of that good stuff) sets the scene for the piece. Sun-baked, hazy, and dreamy. Definitely not how the outside is now, but how we wished it was.

There are four tracks you may have already heard, ‘Like Mariah’, ‘Just Like My’, ‘Nothing Could Be Better’ and ‘Another Thing’, which were all released in an EP just a few weeks ago. ‘Nothing Could Be Better’ and ‘Another Thing’ still stand as a couple of my favourites from the entire album, but the piece as a whole is an interesting journey in itself.

The opening track ‘Early’ is really more of a prelude, and it’s a fitting introduction, too. This track honestly feels like it itself is waking up, getting ready for the rest of the album. It blends straight into the second track ‘Anything At All’, a fairly structured piece with grounded vocals. ‘Like Mariah’ is a warped, but upbeat tune, with slightly more substance than we are sometimes given by Homeshake. Then, however, you have strange interludes like ‘Heartburn’ that eerily remind me of the landing of an alien spaceship. Later in the album, ‘Salu Says Hi’ is another of these funky interludes. I appreciate how they form the album as a whole and make it stand out, but for me they’re probably not ones to listen to on their own.

‘All Night Long’ brings more of those lazy synths, but with an ongoing slightly uneasy electronic babble in the background. Sometimes with some of Homeshake’s work, I find it puts me ever so slightly on-edge. Though that’s not necessarily a bad thing, I think it’s why his music is perhaps more divisive than most artists. I prefer artists who step outside the box, even if it doesn’t bode for such easy listening. Meanwhile, ‘Nothing Could Be Better’ is just lovely. Nothing could be better than this song, really. Tuneful and sweet, one to make you feel soft inside, and slightly towards the more mainstream end of Homeshake’s work – probably why he released it as a single.

‘Other Than’ really stood out on the album, functioning like a teleportation device taking you to lazy, hazy summer days, an almost effortless piece of music. In my mind, this is the track that would be playing in the album cover. Though sometimes I use this as a criticism of music, here it most definitely isn’t, but this track is exactly the kind of music that is just dreamy to have in the background – ideally while you’re doing absolutely nothing. Then a track like ‘Couch Cushion’ comes along, and makes you want to be exactly that. A soft, wobbly track that sinks you into some strange kind of relaxation. It’s almost hypnotic, be wary when you listen to this one (don’t listen to it if you want to get anything done).

I’m unsure if the title of the final track ‘(Secret Track)’ is meant to be ironic? Either way, it feels like the dark horse of the album, satisfyingly bringing it to and end with clean, strong beats, soft synth and even some soothing guitar. It’s as if this final track is putting you back to sleep.

If I’m honest, I hadn’t actually listened to a Homeshake album in its entirety before this, and I’m really glad I did. I’ll probably go and listen to the rest now. Really nice stuff from Homeshake, with enough variation throughout but the same general relaxing and slightly weird vibe that we know and love. Helium is one to have a proper listening session with, front to back.