Seven Decades: The Story of Three Guitars That Changed The World

Seven Decades: The Story of Three Guitars That Changed The World

Seven Decades: The Story of Three Guitars That Changed The World is a gig-documentary hybrid show currently running at the V&A museum in London that celebrates an impressive collection of vintage and original guitars. It ‘s like bringing a guitar museum to life: the show takes you through time from the first ever electric guitars by Leo Fender in America in the 1950s, all the way up to the most iconic rock stars using the electric lap steel guitars. 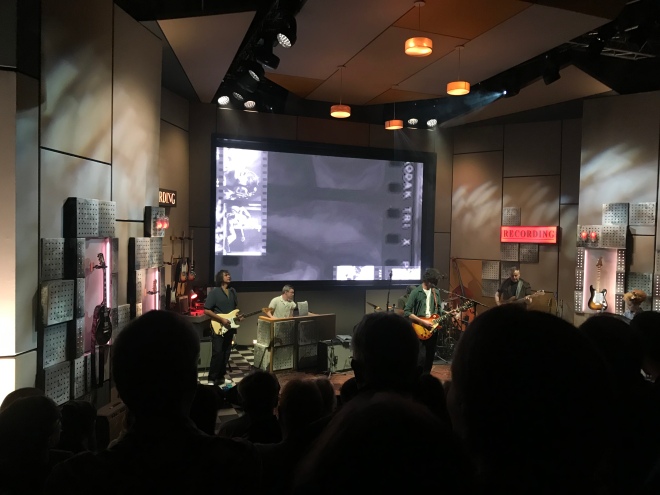 The stage has a theatre design with 7 musicians: the lead guitar which changes as history goes on, a blonde Fender Stratocaster on rhythm, bass, piano and 2 female vocalists with immensely powerful voices able to take on all of the guitar music history has to offer. The extremely high quality and sound of the music is impressive. No imitations, just raw quality guitar sound from 3 timeless silhouettes carried through time.

7 decades explores how guitars, as little pieces of history shaped politics, from the domination of men and shock of sister Rosetta Tharpe, a black woman with a guitar and flower power revolutions of the ’60s. The guitar is more than a 6-stringed instrument, it is soundtrack to generations of change, yet it has not changed itself through migrations and revolutions.

The show celebrates the people that made the guitar such a powerful tool: how Pete Townsend used it as a weapon and how others used it for a voice of change. As the film goes through history, the musicians bring the songs to life. The show picks up the pace by session 3 with Gimme Shelter from the ’70s session, almost perfect, with the vocalists sending shivers, pulling together the twangy Fender telecaster, showing you how music gets darker and louder by the 1970s. Another highlight was the rendition of Led Zeppelin’s “Whole Lotta Love” with the solo of “Stairway to heaven” weaved in, a true representation of the quality of the vintage guitar tones and the musicians that play them, it is really quite special. Their composition of “Moonage Daydream” is punchy and spectacular, exploding out Mick Ronson’s black beauty Gibson in full colour, with a crescendo that gives butterflies.

7 decades is more interesting than a documentary as it’s brought to life and more educational than a gig, it’s something unique yet marvellous. Great cinematography of the background narrative video with superb original footage gives a whole new dimension to the show.

It is a privilege to see and hear the guitars as pieces of history in their best form by people that really know how to use them best. The show allows you to hear snippets of the best guitar music from the last 7 decades, showing the versatility of the instrument. 7 decades is a true celebration of guitar history with musicians miles better than any tribute band could get close to. A must-see for anyone into their musical genres, guitars or just general music history. The show will make you never look at a guitar the same way again. If you aren’t already a fan of guitar music, you’re about to become one.

7 decades has fully sold out their V&A shows but they have future plans for bigger and better things, stayed tuned.

To find out more and listen to each of the guitar’s playlists check out http://www.sevendecades.com