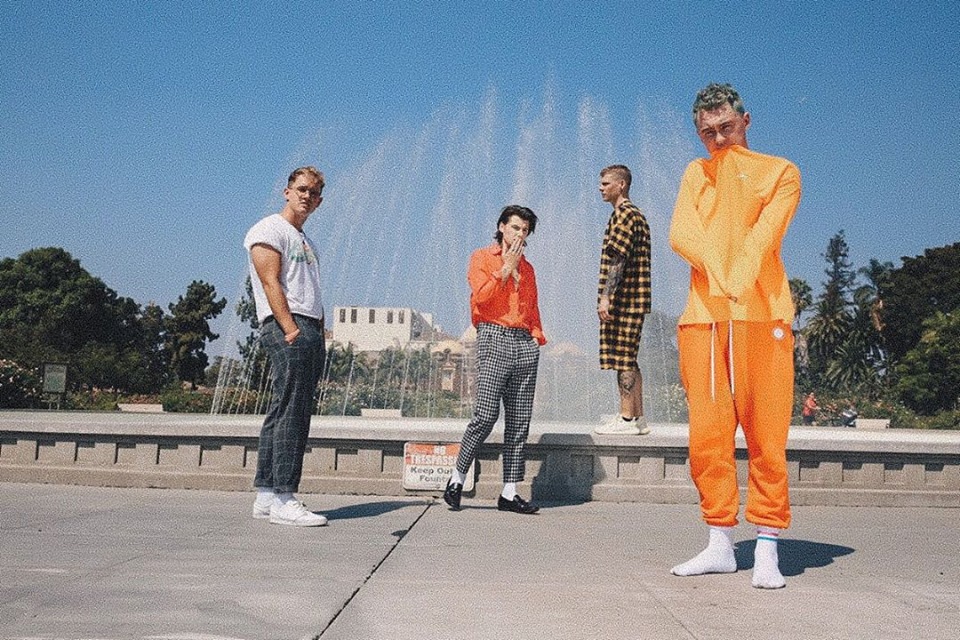 Following the release of their latest track, Thor, earlier this month; new band in town, Push Baby, are fast gaining attention with their incredibly infectious and catchy pop-rock vibes. With their music potentially sounding oddly familiar (it will soon all make sense), Push Baby are definitely one for your summer playlist, and should undoubtedly be added to your list of artists to watch for 2019.

However, before we get into their freshest tracks, here is a quick low down on everything you need to know about the four piece band from Manchester. Starting out back in 2012 under the name Relics, the band soon changed their name to Rixton the following year; which is why they may sound and look so familiar. With their transition to Rixton, the band began gaining attention for their YouTube covers which included Route 94’s My Love and Rita Ora’s How We Do. Following this success, they also produced some incredible original hit singles including Wait on Me and Hotel Ceiling, as well as releasing two EP’s – Me and My Broken Heart EP (2014) and Let The Road (2015). They also supported both Ariana Grande and Demi Lovato on their respective tours in 2015, off of the back of their own Me and My Broken Heart Tour the previous year.

However, at the beginning of this year following a four year long hiatus; Rixton announced that they were back, but now as Push Baby, and ready to drop some new music. And they have definitely not disappointed.

They started off by releasing their first single as Push Baby, Mama’s House, last month at the beginning of the April, with a vibrant and mesmerising music video to go along with it. With the release of Mama’s House singling this new era of Push Baby; the band have definitely not shied away from using this debut track to reflect on where they are now and where they have been over the past four years, with this making the perfect come back track. The lyrics are the most significant refection of this as the track details their struggles after being dropped from their record label (which ensued their hiatus), such as having to move back home – hence the title Mama’s House; which they spoke about candidly in a facebook post following the tracks release. Highly relatable, the lyrics focus on how the band were back home “living at [… their] mama’s house” while being “20 plus and underpaid”. And facing the difficulty of still having to navigate the same celebrity world; while wanting to remain a part of the in-crowd, going to the private clubs and being on the hit playlists. The track most significantly taps into the emotion of the situation and the relatable feeling of trying to work things out while waiting for things to change. Despite this being a new era for the band, the vibe is still the same quintessential Rixton/Push Baby sound; although, with a slightly more mature feel and a bit more of an edgier, indie-rock element. This edgier vibe is also reflected in the tracks music video, which is a colourful, psychedelic experience, seemingly reflective of the inner turmoil the song is projecting.

Following an incredible comeback with Mama’s House; Push Baby followed this up with the release of Thor, which dropped just over a month later. With perfect timing (releasing the track just several weeks after the premier of the Avengers: Endgame movie), the song discusses the angst of feeling intimidated by the person your dating’s previous love; who in this case is represented and idealised through the image of the MCU and Avenger’s Thor. With a more sombre and acoustic-indie vibe, Thor presents much more of a mellow and introspective feel than Mama’s House; which works perfectly to mirror the songs more insecure and heartfelt lyrics. With a more stripped back melody, this track really allows lead singer Jake Roche’s distinctive vocals to come through; and his impressively stunning harmonies, vibratos and falsettos truly take centre stage. Also releasing this single with an accompanying music video, the visuals for this track are also a lot more simple and stripped back; as it mainly just features Roche emotively singing to the camera in front of various landscapes. However, they still manage to include several allusions to the God of Thunder, who the track is named after. Another incredibly honest and relatable track, Thor is definitely worth a listen.

So for those of us who were eagerly awaiting their return, Push Baby have definitely delivered; so far coming back with two incredible singles and music videos, that deserve an instant spot on your current playlist. With any luck, Push Baby won’t keep us waiting too much longer for more new music; so check them out on social media and keep your notifications on to see what they release next!